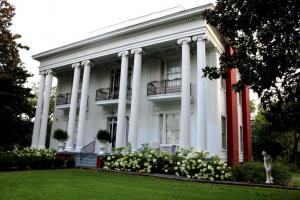 The historic Adams French mansion – a magnificent, 7,000-square-foot antebellum home in Aberdeen, Mississippi on the National Register of Historic Places – is for sale, for $750,000. 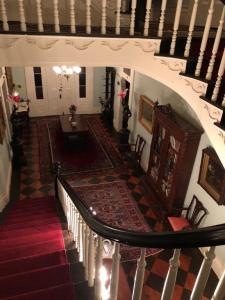 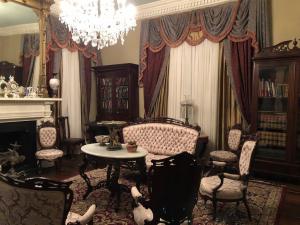 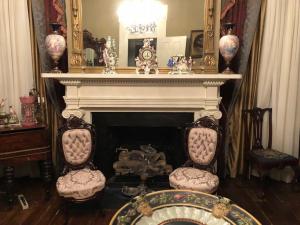 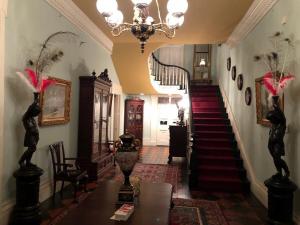 The mansion’s period furnishings may also be purchased at an additional cost. The building and manicured grounds are on the National Register of Historic Places

The mansion was the site of many million-dollar auctions. I have some great memories.”
— Dwight Stevens

ABERDEEN, MS, UNITED STATES, October 22, 2021 /EINPresswire.com/ — The historic Adams French mansion – a magnificent, 7,000-square-foot antebellum home on the National Register of Historic Places, situated on four bucolic acres atop the highest elevated point in Aberdeen – is for sale, for $750,000 (or best offer). The buyer would also have the option of purchasing the home’s top-quality furnishings from the period.

The seller is the mansion’s sole occupant – Dwight Stevens, the owner of Stevens Auction Company, based in Aberdeen. After acquiring the house in 2002, and until 2006, when a fire to the roof forced a two-year renovation, Mr. Stevens regularly conducted his auctions there. “The mansion was the site of many million-dollar auctions,” he said. “I have some great memories.”

The mansion was built starting in 1856 by Col. John Cox, a wealthy plantation owner who was also in the lumber business. Many plantation owners at the time built opulent homes like Adams French for their wives. In Col. Cox’s case, he built the home for his only daughter, Mary Jane. It took less than two years to complete, thanks to Mr. Cox’s sawmill, which supplied the lumber.

In 1857, Mary Jane married Robert Adams, a local banker, and the two moved into the Greek Revival home upon its completion. It was considered an architectural wonder for its time, with a prime location located just three blocks from Aberdeen’s Main Street. The four acres of grounds were beautifully landscaped then, as they are today, with formal gardens, fountains and statuary.

The purchase price includes a former church, first built in 1905 about four miles away by freed slaves who called it the James Creek Missionary Baptist Church. When Mr. Stevens learned that a group was looking to tear the church down, in 2005, he offered to move the structure instead to his mansion grounds. The move was documented on an episode of the Home & Garden channel.

The mansion features five bedrooms, five bathrooms, a modern updated kitchen and a formal parlor that opens into a formal dining room. The basement has been made into a full gym, while the third floor boasts a home theater, giant closets, a spare bedroom and a bathroom. An elevator travels from the basement to the second floor, a feature the Coxes couldn’t imagine in the 1850s.

In 1872, Robert Adams passed away, and Mary Jane eventually re-married, to a local physician whose last name was French (hence the name the Adams French mansion). Dr. French passed away in 1887 and Mary Jane lived the rest of her life in the mansion, twice-widowed. She never had children. When she died, in 1898, the home went to nieces and nephews, who rented it out.

Sadly, what was once a grand structure, the pride of the town, fell into a period of disrepair and neglect. The Masons purchased it in 1933, only using it sparingly, as they already owned a former opera house in town and held their meetings there. But when that burned down, they turned to the Adams French mansion and used it as a Mason meeting hall, from 1941 to 2002.

In 2002, the Masons decided to sell the building and approached Mr. Stevens to handle the auction of it. He agreed, and it changed his life. “I personally guaranteed a selling price of one hundred thousand dollars,” he recalled, “but when nobody bid that, I said, ‘Well, it looks like I just bought myself a mansion.’” From 2002-2006 he held auctions there, but lived elsewhere.

When the fire in June 2006 caused some damage to the home, Mr. Stevens was faced with a choice: roll up his sleeves and renovate and restore it, or let it go to the wrecking ball. “I decided to save it,” he said. “It was actually a fairly easy decision, since I was already involved in the restoration of several other historic buildings in Aberdeen. It was just another major project.”

The house has the original mantel, heavy crown molding and a spiral staircase that spirals from the 1st to the 2nd floor and then again from the 2nd to the 3rd floor. All the rooms are tastefully done, with period accessories. The windows have heavy custom drapes and all the rooms have period 19th century chandeliers and gasoliers (which would be included in the purchase price).

Over the last ten years, many modern updates have been made to the mansion, to including new electric, plumbing, storm windows, insulation, three units of central heating and air and hot water on demand on the third floor. The home is comfortable twelve months of the year, with very reasonable utility bills. “Upkeep is no more than any home of its size,” Mr. Stevens remarked.

Interestingly, the Adams French mansion is only standing today because, during the Civil War, the Union General William T. Sherman got sidetracked on his scorched-earth march through Mississippi, leaving Aberdeen and several other Mississippi towns intact. It was a fortunate twist of fate, as lovely antebellum structures like Adams French are a large slice of American history.

Anyone interested in buying the Adams French mansion may call Dick Leike of Crye-Leike Realtors, at (901) 486-2070. “I have over one million dollars invested in Adams French and its grounds,” Stevens said. “I hope to find a buyer who will take over the mansion and church and live there or share with the community by opening it to pilgrimage and community events.”

Visitors to the Stevens Auction Company website – www.stevensauction.com – can learn more about the Adams French mansion by clicking “Real Estate” on the toolbar. They can also watch a YouTube video on the home, at https://www.youtube.com/watch?v=WlXjZzQcPPE&t=47s.