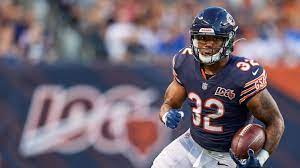 Show highlights include Montgomery exploring his gaming skills in “Call of Duty: Warzone,” and discussing how he plays the game 8 hours a day between football workouts.

Show highlights include Montgomery exploring his skills in “Call of Duty: Warzone,” and discussing how he plays the game 8 hours a day between workouts

IRVINE, CALIFORNIA, UNITED STATES, April 21, 2021 /EINPresswire.com/ — David Montgomery has become a target for NFL defenses, emerging last season as a top offensive threat and a top 5 NFL running back for the Chicago Bears.

During his downtime from eluding defenders, the hunted becomes the hunter when Montgomery explores the virtual world of his favorite game, “Call of Duty: Modern Warfare,” as a gaming sniper and enjoys streaming his gaming adventures on Twitch to his fans:

Some of the topics covered in Cochran’s interview with Montgomery include:

• what’s the secret behind his bruising running style,
• how his training is going for the upcoming season,
• how he plays up to eight hours each day of “Call of Duty” in between his football workouts,
• why FaZe Clan is his favorite esports organization and Nickmercs is his fave gaming streamer,
• how the video game Super Mario Kart changed his life as a youngster,
• how he shared his first Xbox console with his four brothers growing up,
• how he felt when later when his own Xbox console was hit with the dreaded “Red Ring of Death” hardware breakdown and his subsequent tough
transition to PlayStation,
• what he prefers – Chicago or New York pizza,
• could he outrun a Kangaroo, Ostrich, or Cheetah in a 40-yard dash,
• and how many pounds can he squat and dead lift.

You can watch the entire show, which aired on April 20, here:
(https://youtu.be/gumNYZ3JfB0 ).

Montgomery, drafted in the third round by the Chicago Bears in 2019, had a breakout season in 2020 where he gained more than 1,500 yards from scrimmage (5th most that year), with 1,070 rushing yards, 10 touchdowns, and had the league’s fourth-best receiving yards by a running back (438). He was the only running back in the NFL last season with more than 1,000 rushing yards and over 400 receiving yards.

In Week 14 against Houston, he broke a career-long 80-yard touchdown run on the Bears' first play from scrimmage. It tied the longest scoring run by the Bears in the Super Bowl era (with Neil Anderson's 80-yard TD run vs. Green Bay on Nov. 27, 1988).

The following week at Minnesota, Montgomery set career-highs with 146 rushing yards on 32 carries with two touchdowns against the Vikings. He joined Hall of Fame legend Walter Payton as only the second player in Bears history with 30+ carries, 140+ rushing yards, and at least two rushing touchdowns in a single game.

Montgomery found the end zone for the sixth consecutive week in Week 17. He was the first Bears player to have scored in five straight weeks since Alshon Jeffery in 2014 and the first to rush for a TD in five straight since Neal Anderson in 1990.

His 2,582 yards from scrimmage through two seasons ranks fourth-most in Bears’ history during that span.

Before embarking on his NFL career, Montgomery was a two-time All American, and in 2019, earned Big 12 Male Sportsperson of the Year at Iowa State,

When he is not on the football field, Montgomery has a passion for philanthropic work, and he loves cooking and fishing, as well as, of course, gaming.

“As a first of its kind, The Gamer Hour celebrates the convergence of traditional sports, music, comedy, and acting with esports and gaming. If you enjoy hearing about celebrities that have grown up with gaming, and who lead interesting busy lives, The Gamer Hour is a must-see and share show,” said Mark Thimmig, chairman, CEO of Esportz Network.

The Gamer Hour, which is filmed at the iconic New York City Times Square Reuters studio and produced by Reuters Broadcast Solutions and Esportz Network, is available globally on Fite.TV, (https://www.fite.tv/vl/p/esportz-network/), and more than 50 media distribution platforms.

The Gamer Hour, airing on Tuesdays at 6 p.m. PST, features interviews with celebrities from traditional sports, musicians, comedians, and movie stars that enjoy gaming. This show was designed to meet the ever-increasing demand for high-quality, fun, and compelling video-on-demand esports and gaming programming.

Fans can view the show and follow upcoming guests and showtimes on The Gamer Hour website and through social media including its popular Tik Tok page, (https://www.tiktok.com/@gamerhourshow).

Those interested in becoming a show sponsor for The Gamer Hour, appearing as a show guest, or investing please reach out to Esportz Network at info@esportznetwork.com.

Esportz Entertainment Corp. is located at the epicenter of esports, surrounded by hundreds of the greatest names in game development, arenas, tournament play, and those who drive the global esports industry. Esportz Entertainment Corp. through its Esportz Network, (https://www.esportznetwork.com), one of the largest global esports news organizations with over 90 reporters, photographers, videographers around the world, and a Reuters global partner for esports, is covering esports leagues, teams, athletes, along with the people and the companies behind the sport in a manner that matches the excitement and rapid global growth of esports. Esportz Network is developing additional high-quality programming directed to the broader esports /gaming audience and communities.