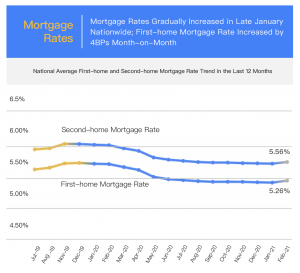 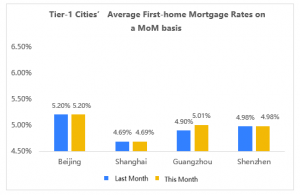 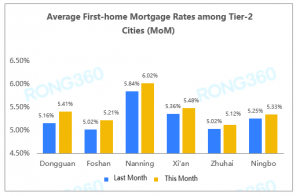 According to surveillance data from Rong360 Big Data Research Institute across 674 bank branches and sub-branches in 41 major cities, in February 2020 (with data in statistics collected from January 20, 2020 to February 18, 2020), the national average mortgage rate for first-time homebuyers was 5.26%, increasing by 4 basis points (BP) month-on-month (MoM); The national average mortgage rate for second-time homebuyers was 5.56%, an increase of 3BPs on a MoM basis.

According to surveillance data from Rong360 Jianpu Technology (NYSE: JT) Big Data Institute across the 41 cities for February 2020 (with data in statistics collected from January 20, 2020 to February 18, 2020), 18 cities recorded a MoM increase in mortgage rates, six of which experience an increase of over 10BPs. Five cities posted MoM decreases in mortgage rates with the highest drops of 7BPs and 3BPs for first- and second-time homebuyers, respectively.

Since late January 2020, a new round of tighter regulations on the mortgage market was imposed, which gradually spread from tier-1 cities to hot spots in major property markets. Guangzhou is the most affected by the new policy. In just a few days, the city experienced a tightened quota, an uncertain loan cycle, and increased mortgage rates of average first- and second-home mortgage rates increasing by 11BPs and 4BPs, respectively, on a MoM basis.

Except for Guangzhou, other regions in Guangdong raised mortgage rates, of which Dongguan and Foshan increased rates overall. Dongguan saw the most significant increase with first- and second-home mortgage rates rising by 25BPs and 27BPs on a MoM basis, respectively. Foshan, Zhuhai, and Huizhou posted growth in the rates as well.

Most other tier-2 cities saw increases in mortgage rates as well. Nanjing recorded a MoM increase of 18BPs in the mortgage rate, lifting it back to the level of over 6%. The highest increase in Nanning reached 6.3%. Ningbo, Zhengzhou, and Dalian also saw increases of over 5BPs.