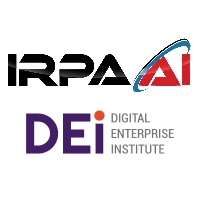 Your Gateway to the software automation, AI & digital transformation marketplace.

Getting Automation right can be truly transformational and staggering ROI can be achieved. But, contrary to popular belief, achieving this requires more than simply deploying RPA tools in isolation.”
— Nick Andrews, RPA industry pioneer and Founder, Virtual Operations

NEW YORK, NEW YORK, U.S.A., January 5, 2021 /EINPresswire.com/ — As part of its new Executive Education initiatives and as a result of increasing membership demand, IRPA AI has launched its Certified Intelligent Automation Professional training, an interactive online program designed to help executives and their companies implement successful automation programs, evaluate various technologies, be made aware of their limitations and pitfalls, and learn how to identify the best opportunities to build, run and sustain a successful automation program.

The result is a comprehensive understanding of and the ability to realize the true potential of intelligent automation when applied smartly and in combination with process excellence. The program’s subject matter, developed in partnership with Virtual Operations, one of the pioneers of RPA and long-time process automation specialists experts, will include:

Designed for anyone looking to transform operations through intelligent process automation, the program is ideal for:

– Professionals who want to gain an understanding into the delivery of automation projects, including best practices and common pitfalls

“Now more than ever before, we need to support companies who may need several years of digital transformation in a matter of months. As organizations’ priorities shifted in 2020 and physical gatherings became impossible for the foreseeable future, we immediately started working with our members to ensure we supported them through unchartered waters and uncertain times,” said Daniel Goodstein, President of IRPA AI and Digital Enterprise Institute.

“It became apparent that what they needed most, was hands-on assistance , an alternative to traditional consulting and a substitute for conferences & events, which previously was their primary source of networking and industry education. Requests for assistance within our network has exploded, so in addition to offering free Industry Briefings and coaching with many members, we made the decision to add online executive education to our portfolio of member benefits."

IRPA AI's CIAP Training is Powered by Virtual Operations, a process automation consultancy who has been at the forefront of RPA since its origination and has provided intelligent automation training to 100’s of executives over the past several years.

“Getting Automation right can be truly transformational and staggering ROI’s can be achieved. However, contrary to popular belief, achieving this requires far more than simply deploying RPA tools in isolation. The intelligent combination and application of automation technologies combined with advanced Process Excellence skills is absolutely critical and automation should be seen as vital part of a Process Excellence or Digitization Program rather than a goal in itself,” said Nick Andrews, RPA industry pioneer and Founder, Virtual Operations.