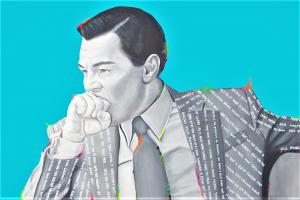 Sell Me This Pen

Will McNally has reimagined iconic scenes from gangster epics, comic book classics and Oscar winning favourites – and captured the attention of Hollywood.

LONDON, UNITED KINGDOM, October 20, 2020 /EINPresswire.com/ — Will McNally has reimagined iconic scenes from gangster epics, comic book classics and Oscar winning favourites – and captured the attention of Hollywood along the way.

His unique takes on scenes from The Dark Knight, The Wolf of Wall Street and more have made the self confessed movie buff a favourite among cinephiles, and interest is only continuing to grow.

In the past six months, his artwork has increased in value by just over 58 per cent, and film studios are taking notice, hiring Will for several private commissions.

Will has said that he’s motivated by the challenge of putting a unique twist on famous movie scenes, creating something that can be enjoyed by film fans and art collectors alike.

He said: “For me, the challenge is creating an epic piece people will remember, that uses famous scenes to make them instantly memorable – while bringing something unique to each piece that takes it to a new level. I’m a huge movie buff, and I just love creating pieces that you can cherish and put on your wall, that will stand out and make people go “wow” when they come to your house.

“Films are my comfort zone, and I love sitting down and capturing what I get from them on the canvas.”

A recent Wolf of Wall Street inspired piece, in which quotes from the film appear on Leo DiCaprio’s pin striped suit, has racked up likes on Instagram. He’s now in the early stage of a new series looking back through famous gangster movies, and creating challenging new ideas that will breathe new life into famous scenes from films such as Pulp Fiction.

His work has put him in high demand in Hollywood, with commissions from both Universal and Warner Bros. For the latter studio, it was one of his most extravagant pieces to date.

“I’ve been commissioned by Warner Bros to do special edition, customised busts of Mortal Kombat characters for their clients. I did one of the character Scorpion, where if you turned off the lights it’d glow in the dark and look like the skull was on fire.”

In 2021, it seems likely that he will be entering the art world A-list. To find out more about why Will McNally is fast becoming Hollywood’s favourite artist, and to arrange to view his collection, visit https://www.einpresswire.com/contact_author/528736575.