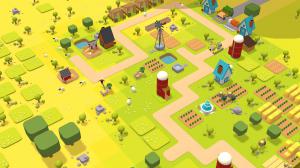 There are 3.1 billion gamers out there, just waiting to actually own their games. We want to be a part of the revolution and look forward to partnering with anyone who wants to play with us.”
— Eric Schiermeyer, CEO of Gala Games and cofounder of Zynga

SAN FRANCISCO, CA, UNITED STATES, September 23, 2020 /EINPresswire.com/ — A key challenge facing most blockchain gaming companies is the fact that their focus is on blockchain, rather than gaming. Gala Games has turned this model upside down by operating as a game development company that interacts with the blockchain, and not a blockchain company that makes games. This distinction makes a difference, as titles developed by Gala Games are geared for mass adoption. Less than two weeks after the launch of GALA on exchanges, Town Star, the first title produced by Gala Games, is hitting daily records for daily active users (DAU). Town Star is a competitive town-building experience reminiscent of some of the most popular games in recent history.

"For us, blockchain represents a massive opportunity to disrupt some of the 200 billion dollars spent yearly on games." says Eric Schiermeyer, CEO of Gala Games and cofounder of Zynga, the gaming giant with over 20 m daily active users, on average. "Blockchain games are no more complicated to adopt for the average user than it is to create an account on Instagram or TikTok. There are 3.1 billion gamers out there, just waiting to actually own their games. We want to be a part of the revolution and look forward to partnering with anyone who wants to play with us. This is just the beginning but it feels like the old days of FB gaming."

One of the central tenets of the ethos behind Gala Games is best encapsulated by their motto, "OWNED BY PLAYERS." Michael McCarthy, the President of Games at Gala Games, says of the concept: "We want players to not only own their in-game items, we want our Gala Gamers to have a voice in our roadmap. We want to enlist them, via distributed voting mechanisms, to help determine what games we should be developing and funding." McCarthy, an experienced developer who served as the Creative Director for Farmville 2, which achieved over 34m DAU in its illustrious run, and whose resume also includes titles such as Fallout 1 & 2, Arcanum, and Vampire: The Masquerade – Bloodlines, believes that the future of gaming is in player ownership of data and game assets, as well as the decentralization of the gaming experience.

With over 20 team members actively developing, Gala Games is moving quickly. Just last week, they formed an alliance with Splinterlands, the market-dominant blockchain-based card fighting game. Splinterlands now accepts GALA as a form of payment for card packs and their Summoners Spellbook. As Splinterlands is a member of the Gala Games Alliance, Gala Games is offering a promotional feature — for the next two weeks, those who purchase 100 booster packs using GALA will get a limited-edition top secret Splinterlands-themed NFT that they can use in-game in Town Star. Additionally, their ERC-20 smart contract just received the stamp of approval from AnChain.AI, a MIT Technology Review referenced auditing company.

With a new game announcement rumored to be just around the corner, Gala Games is continuing to push for mass adoption. "Currently, we are building out a complex and evolved ecosystem involving multiple games, NFT purchase functionality, and new concepts like crypto-crafting on the horizon." says Gala Games CMO, Jason Brink. "If you come to our website, gala.games, you can see more of what we are working on, and get a better understanding of the sweeping vision we are bringing to the blockchain world."

About Gala Games
Gala Games is revolutionizing gameplay by giving players control of their in-game assets and creating an easy onramp to bring non-blockchain players into the cryptosphere. Headed by the co-founder of Zynga and the Creative Director behind viral gaming phenomena such as Farmville 2, Gala Games is poised to bring blockchain gaming to the masses. Find out more at https://gala.games or join their Discord server at http://galagames.chat