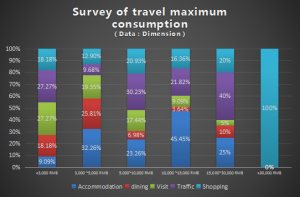 The data shows that the total expenditure on basic travel (transportation, food and beverage, accommodation and sightseeing) for the consumer group with monthly after-tax income of less than 30,000 RMB in the most recent trip is not much different And income of more than 30,000 RMB consumer groups, almost all people think in shopping the highest consumption, the proportion of this group reached 100%.

In addition to the monthly income of more than 30,000 RMB, other income groups in the course of travel expenses are accommodation, transportation, catering and other basic items of expenditure accounted for the highest proportion.

Ms. Yang, who earns about 8,000 RMB a month after taxes and works in Shanghai with her husband, accompanied her parents from her hometown on a short trip around Jiangsu, Zhejiang and Shanghai during the National Day holiday. Under the influence of the holiday season, Suzhou, Hangzhou and other places during the National Day hotel reservation rate and prices have great fluctuations.

Take an economic hotel chain in Hangzhou as an example. The normal standard room rate of 199 / night before the holiday has risen to 299 / night during the National Day. The price has almost doubled by half.

Out of consideration of cost, Miss Yang family chose to drive self-driving tour, do not live, same day return. "During the long vacation, hotels are too expensive, so the cost of playing is not high, and the money is mainly spent on accommodation, we chose to drive on the same day and return. Fortunately, the distance is not far, and driving is very convenient", Ms. Yang said.