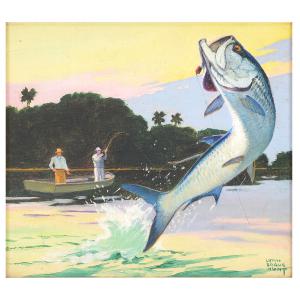 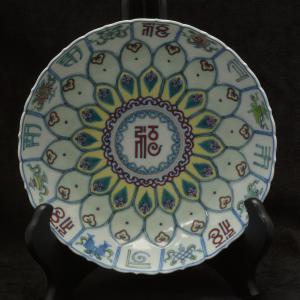 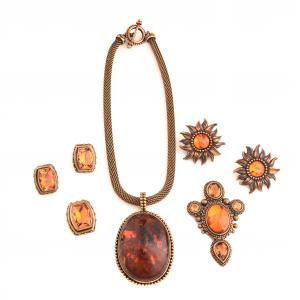 Previews: December 1, 5, 6 and by private appointment

Since its inception Michaan’s Auctions has been a premier resource for international collectors of Tiffany Studios glass. December brings the sale of the lustrous Tiffany Studios dragonfly lamp #1495-29, an outstanding example of Tiffany’s genius. The lamp is composed of a 20-inch dragonfly cone shade with strong coloration ranging from mottled blue-purples to beautiful greenish-blues, atop a rare bronze ‘twisted vine’ base with a striking green and brown patina. The shade is unusual in that all of the Tiffany glass cabochon ‘jewels’ are plated with an extra layer of glass on the interior, deepening the coloration. Estimated at $75,000-$95,000, the Tiffany Studios dragonfly lamp is accompanied by an original bill of sale dating to October 21, 1949_. The lamp has been in the same family since its purchase back then.

Also among the superb pieces offered in December is a ‘curtain border’ glass and bronze hanging lamp, Tiffany Studios #1615-21. In this iconic design, one can easily perceive the influence of ancient and classical art forms on Louis Comfort Tiffany's innovations in glass. The

magnificent shade is a mosaic of rich green-ocher-yellow colors illuminated by six lights. Circa 1910, the ‘curtain border’ Tiffany Studios hanging lamp is estimated at $40,000-$60,000.

Other period lighting of note in this auction: a fine French Art Deco chandelier of iron and glass designed by Edgar Brandt for Daum. Brandt’s collaboration with Daum produced light fixtures of grandeur and loveliness. Estimated at $25,000-$35,000, the Daum and Brandt Art Deco chandelier is one of many fine decorative furnishings that await Michaan’s December bidders. Another handsome lamp is by Duffner and Kimberly, New York circa 1910. Their water lily table lamp, offered at $3,000-$5,000, has been in the same family for decades. The featured water lily motif in the leaded slag glass shade is repeated in the lamp’s bronze base.

Fine silver draws many bidders to each of Michaan’s monthly auctions. In December a leading highlight is the 19th century sterling elephant head bowl by Tiffany & Co., one of several ‘elephant head’ articles in the Tiffany & Co. archives. The design of this footed centerpiece bowl, resplendent with repoussé decoration, is attributed to Eugene Soligny, whose works in fine silver are found in the collections of the Metropolitan Museum of Art and the Art Institute of Chicago. On two sides of the spectacular bowl are the noble heads of elephants with trunks extended; estimated at $30,000-$45,000. The December auction also features fine period furniture and a rosewood grand piano in the Neoclassical style by Collard & Collard (late 19th Century, $10,000-$15,000).

Fine jewelry anchors Michaan’s Auctions year-round and holds special sway in December, the season of giving. Highlights of the December 7Gallery Auction include many lovely pieces from the estate of Sylvia Blumenfeld, a distinguished collection also featured in the Winter Fine Sale on December 6. Sylvia Blumenfeld (1921-2018) was a highly accomplished woman of style whose education and world travels informed her discerning taste in fine art and jewelry. Jewels from her estate include the collection of amber, citrine and bronze jewelry items by Stephen Dweck ($400-$600) and the David Yurman amethyst, sterling and 14k yellow gold jewelry suite ($500-$700). Unique pieces include the bug on leaf brooch of cultured pearls, coral, nephrite jade and 14k yellow gold ($300-$500). A collection of enamel jewelry items by Hermès is offered at $400-$600 and a vintage pink Chanel jewelry suite is estimated at $300-$500. The multi-stone, vermeil jewelry suite ($400-$600) is by designer Kai-Yin Lo, noted for creating modern, original pieces inspired by her Chinese cultural heritage.

as the 14k yellow gold mesh purse ($3,500-$4,000). Jewelry styles of dazzling diversity are offered, with many great finds and excellent values among them.

A highlight in December is “Flower Garden” by William Chadwick (1879-1962), whose works have sold well at Michaan’s this year. Chadwick traveled widely in the United States, painting scenes of city and country life with an emphasis on capturing the effects of natural light. Chadwick’s contemporary Alson Skinner Clark (1876-1949) is also featured. Clark’s 1938 watercolor, “Flower Field,” is estimated at $1,200-$1,800. Two mosaics by Benjamino Bufano, each estimated at $1,000-$2,000, are also among the American works. The Italian-born Bufano created delightful modernist sculptures, including many for public spaces in San Francisco.

A special highlight of the December Gallery Auction is a selection of exciting works by venerated South Asian modern artists. The watercolor “Village Scene” ($5,000-$7,000) is by Sayed Haider Raza (1922-2016) who lived and worked in France as well as his native India. Raza, who was a visiting lecturer at the University of California, Berkeley in the early 1960s, was a cofounder of the Bombay Progressive Artists’ Group. This movement sought to cultivate a uniquely Indian artistic vision, turning away from Western influences and linking modern artistic works to Indian roots and cultural themes. The ink and graphite drawing “Seated Woman” ($2,000-$4,000) is by Pakistani artist Abdur Rahman Chughtai (1894-1975), widely considered the foremost painter of the region. Chughtai was awarded an honorary title by the British Empire in India, but he rejected the colonial aesthetic and drew on Islamic traditions and the world of the Mughals for inspiration. The December auction includes two untitled pastels on paper by Ram Kumar (1924-2018), a leading Indian abstract painter also associated with the Bombay Progressives. Especially noteworthy is “Mother With Dove” by M. F. Husain, a groundbreaking Indian painter of international acclaim. Husain (1915-2011), also a filmmaker, formed part of the Bombay avant-garde in the 1940s. His brightly colored figurative paintings with Cubist tendencies are singular in style and sometimes controversial in subject. “Mother With

Dove” ($10,000-$15,000) is a large painting suggestive of themes interwoven throughout Husain’s body of work: the dove of Peace, Mother India, Mother Teresa. Paintings by M.F. Husain can be found in the collections of LACMA, the National Gallery of Modern Art in Mumbai, and the National Museum of Islamic Art in Doha, Qatar among others.

Asian art presented by specialist Annie Zeng in the December 7 Gallery Auction features exemplary pieces. From a distinguished San Francisco collection, the 5th Century Chinese gilt bronze Buddhist altarpiece is estimated at $20,000-$30,000. This important Northern Wei Dynasty artifact features numerous figures of Buddha, a pair of lions and abundant calligraphic inscription. From the same period, the rare Chinese bronze standing figure of Shakyamuni is offered at $15,000-$25,000. In this imposing work, a lotus pedestal supports the beautifully detailed figure of the monk on whose teachings Buddhism was founded.

Among the fine textiles is the 19th Century Taoist priest’s dragon robe of imperial yellow silk ($15,000-$20,000). Always highly sought by collectors, the dragon robe is embroidered with every motif and symbol central to Taoism, such that it truly represents the cosmos. Apart from its deep symbolic value, the dragon robe is also a cultural artifact of extraordinary beauty decorated with flora and fauna, clouds and planets, pagodas and treasure emblems in an astonishing range of colors including metallic gold-wrapped threads.

Michaan’s December highlights also include a lingbi scholar’s rock with fitted base. As always there is a selection of fine Chinese porcelains, many styles and periods. One lovely example is the Longquan celadon bottle vase featuring a rich plum green glaze ($1,000-$1,500).

For a complete calendar of Michaan’s auction events, please visit www.michaans.com,where a detailed catalog of all auction lots will also be available.