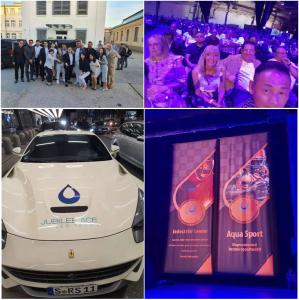 MAINZ, GERMANY, October 18, 2019 /EINPresswire.com/ — Following the company’s successful Frankfurt seminar on 16th August, Jubilee Ace conducted a European Launch in Mainz on 16th September 2019 at the Halle 45 event hall. This second launch which is of a larger scale compared to the first, is a testament to the commitment and faith that the company is putting into the European market as Jubilee Ace seeks to forge a presence in the region.

The seminar was attended by more than 1000 peoplefrom all parts of Europe and Asia with top leaders from Japan gracing the event. The seminar commenced with a short welcome address and the sharing of company targets that Jubilee Ace has for the European market. Technicians were on site during the seminar to demonstrate the company’s holistic arbitrage platform. AQUA, otherwise known as Ace Quantum Universal Arbitrage is an automated arbitraging system that operates 24 hours a day, 7 days a week and executes trades 100% automatically. AQUA is deployed worldwide to scan and formulate the best arbitrage combinations, giving rise to a low risk, high performance system. It develops profitable trading and arbitrage scenarios across the company’s three specialised fields – commodities, cryptocurrencies and sports.

The event concluded with a live demonstration using the cryptocurrency hedging software. The technicians managed to make a substantial profit for the participantsin a very short span of time. Participants witnessed the power of the software and were amazed at it, reinforcingthe belief in Jubilee Ace and the company’s AQUA arbitrage system.

There was also a nice surprise by the Aqua team to all participants. A brand-new Aqua Cryptocurrency was showcased to the public for the first time! This sneak preview gave the participants a feel of an improved speed of processing the arbitrage trades and of course a live demonstration of how fast this could be when running at full potential. Many including the industry leaders were impressed by the new Aqua. This breakthrough of the speed were attributed by the hardworking Aqua team who works day and night, trying to find a balance between speed and performance!

Jubilee Ace would like to specially thank the team of Japanese leaders and all participants for attending the seminar as the company looks to expand in the European market. Jubilee Ace will continue to make an impact globally as the company works together as a team to scale greater heights. Jubilee Ace, the Ace of the Galaxy!