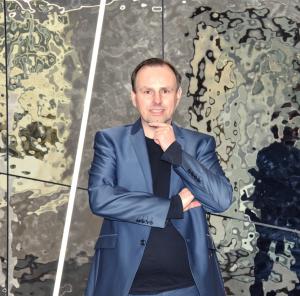 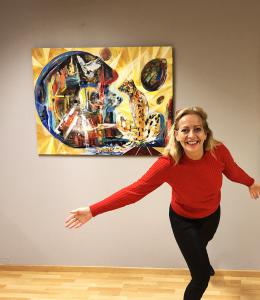 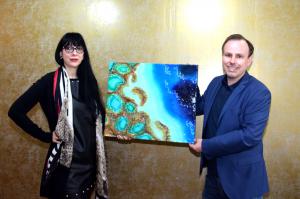 Curator of the MAMAG Modern Art Museum Heinz Playner shows selected art from many countries at the Cannes Palace.

Howard Harris from the USA realizes a mix of photography and design. The philosophical basis for Harris' work is partly the study of quantum physics and chaos theory, in particular the proposition that the observer always influences what is observed. With a little eastern philosophy of Pratt, the artist also comes under the influence of an eastern perspective, in which reason and logic withdraw to a more spontaneous appearance of form. At the same time, an inherent need for structural organization is expressed in the weak grid pattern that underlies each work.

The artist Lilly (Ljiljana Burcul Lilly) from Serbia was selected for her special technique such as delicate silk painting for the Art Biennale in Cannes. She has developed a special and original ability to paint the silk base with other materials, preferably with Swarovski crystals and glass beads. Continually inspired by the secrets of human existence, her figural and abstract painting of the intensive coloring is oriented towards vitality, thus representing the artistic expression of driving energy in the basis of reality.

Black and white photography will be also on display at the Cannes Biennale with works by Maurizio Iazeolla from Italy and Katerina Panagiotopoulou from the UK. The themes that Maurizio Iazeolla prefers are landscapes, especially at dawn and dusk, and water is the element that is present in almost all images of this genre. The black and white snapshots of faces and trapped situations during his travels represent a feature of his iconographic production.

Greek-born and UK-based artist Katerina Panagiotopoulou explores the facts and fictions of photography. She explores human emotions and the dark sides of the human mind, combining facts and fictions to create images of short photo stories, uncover hidden truths, dismantle stereotypes, and construct mythologies. The work of Katerina Panagiotopoulou is primarily project-based and focuses on the philosophical and physical pressures of human nature.

Also the sculptures will be present at the Biennale. Artist Hasna Sal from the USA shows her glass sculpture "Utopia". "My sculptures are a cornucopia of layers, textures, tonalities, resonances, moods, emotions, morals, chaos, and much more, and finally, my sculptures are the voice of color, color is fundamental to the human mind, soothes and invigorates "Humanizes us … and I'll let it go," says artist about her art. The sculpture "Utopia" shows a glass nest made of plants and animals. It took several weeks "to create a small cosmos where harmony and peace exist, where scale and hierarchy have no meaning, where nature unfolds in bold and tasteful colors, and where the secret of happiness lies in the little things" – says Hasna Sal about this work.

The Iranian-born and French-born artist Pari Ravan shows her concept of the people with the animal heads at the Cannes Arts Biennale. She makes women with cat heads and men with dog heads. The graceful, mysterious and seductive she combines with cats and strength and protection embodies them in the figures with dog heads.

Pirjo Sievänen from Finland works on abstract paintings and a combination of abstract and figurative paintings. In her art she follows thoughts, ideas and goals. Then there is a feeling and surprising elements. The abstract work "Rock Dog" of Pirjo Sievänen, which will be shown at the Biennale in Cannes, also includes a framework made of wood and leather, which frames the work of art and makes the perfection of the overall concept.

Art, film, politics often do not only go next to each other but are also united. The artist Anne Margrethe Bjerkebro from Norway was selected for the Cannes Biennale. At the Biennale she will be showing several works of art including the artwork "What`s your brand?". The artwork was created two months before Donald Trump became president of the United States. In the artwork she shows in a whimsical form the election campaign between Donald Trump and Hillary Clinton which she interprets as a mouse Jerry with the bomb.

The classic motifs will also be presented at the Biennale, based on the closeness to nature and the precision of the moments. Among such artists is Jacqueline Hocquard from New Zealand. Jacqueline describes her work as an attempt to capture memories and the reality of the natural world. Although she uses a camera for her artistic studies, her finished paintings are built as a composition. The year 2018 was an exciting year, dealing with acrylics and now with watercolors.

Artist Lilyana Petrova Lulu from Bulgaria focuses on painting and design. Lilyana Petrova Lulu strives for self-expression through a variety of techniques and materials. In recent years she has worked as a costume designer in various reality formats of television as well as in various areas of the Bulgarian film industry. The sensitive emotions and emotional moment as well as a great representation of their works of art will be able to see the visitors of the Cannes Biennale live.

For the artist Christin Ohlin sign Kin from Sweden, art is not only a self-healing tool, but also the communication tool between her psychic language and the viewer. "Capturing the meaning of life, feeling that we live and that there are possibilities, gives me a sense of gratitude and magic that expresses itself in my creation" – says artist Christin Ohlin.
The Biennial will take place from 17 to 19 May in Cannes Palace.